Page IV of the Uomo P/E 2006 Issue of moodjournal 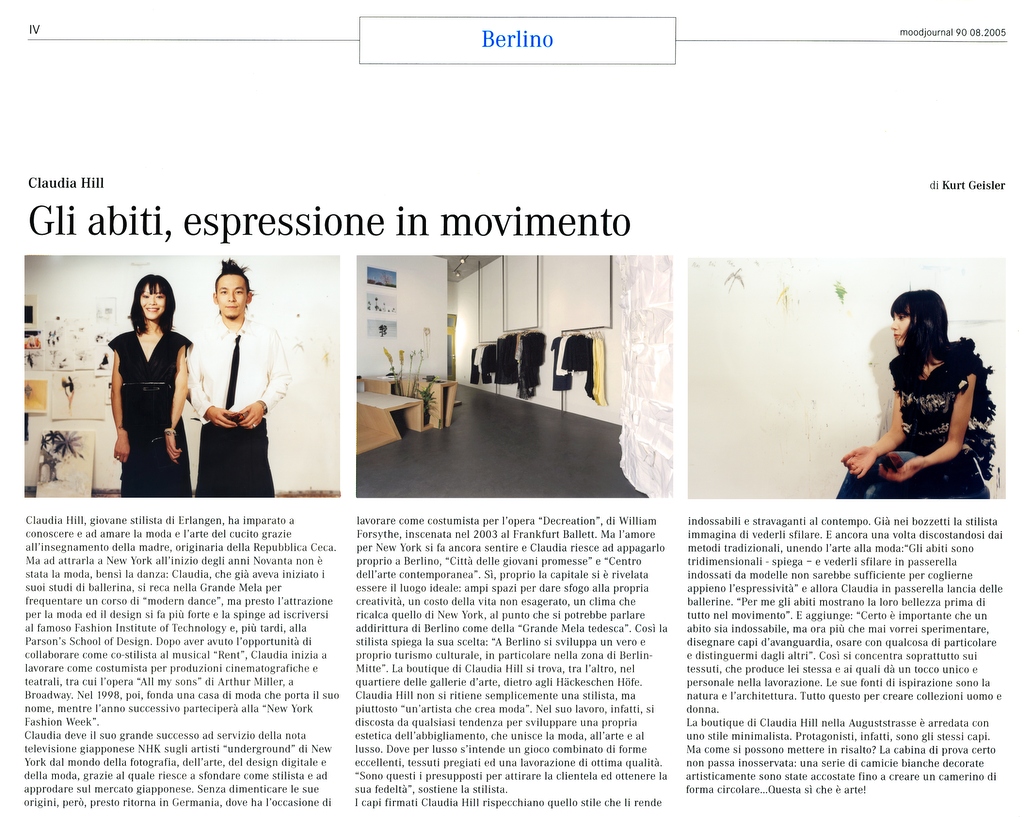 Claudia Hill, the young fashion designer from Erlangen, Germany learned her love and understanding of fashion and the art of sewing from her mother, originally from Czech Republic. But what attracted her to New York at the beginning of the Nineties wasn’t fashion, but dance: Claudia, who had already started training to be a ballerina, went to the Big Apple to attend a modern dance course, but soon her attraction to fashion and design grew, and led her to enroll at the famous Fashion Institute of Technology, and later Parson’s School of Design. After having the opportunity to work on the musical “Rent” as assistant costume designer, Claudia began to work as costume designer for film and theatrical productions, a Broadway production of Arthur Miller’s play “All my sons” among them. Then in 1998 she started a fashion label bearing her own name, and the next year she took part in New York Fashion Week.

Claudia owes her huge success to a program made by the well known Japanese television network NHK, on the “underground” artists of New York in the worlds of photography, art, digital design and fashion, thanks to which she managed to make it as a successful fashion designer and break into the Japanese market. She never forgot her roots however and soon returned to Germany, where she had the chance to work as costume designer on William Forsythe’s “Decreation”, staged in 2003 at the Frankfurt Ballet. But her love for New York resurfaced again and Claudia managed to satisfy it there in Berlin, the “City of young talent” and “Center of contemporary art”. Indeed the capital itself proved to be the ideal location: plenty of space to provide an outlet for her creativity, a reasonably moderate cost of living, a climate quite like New York’s, to the point that you could say that Berlin really is the German Big Apple. This is how the designer explains her choice: “In Berlin a real cultural tourism is growing up, especially in the Berlin - Mitte locality”. Claudia Hill’s boutique is located, among other things, in a district of art galleries, behind the Hackersche Höfe. Claudia Hill doesn’t think of herself just as a designer, but rather as “an artist who creates fashion”. In fact, in her work she steers away from any trends to develop her own clothing aesthetic, which brings together fashion, art and luxury. Where luxury means an interplay of exquisite form, exclusive fabrics and excellent quality workmanship. “These are the prerequisites to attract our clientele and keep their loyalty,” maintains the designer.

Clothes with the Claudia Hill label reflect a certain style that makes them at the same time wearable and quirky. Even at the sketching stage the designer is seeing them on the runway. And once more diverging from traditional methods, uniting art with fashion: “Clothes are three dimensional – she explains – and seeing them parading on the runway worn by models wouldn’t be enough to give them full expression” and so Claudia brings ballerinas to the runway. “For me clothes show off their beauty best of all in motion”. And she adds” “Certainly it’s important that a piece of clothing is wearable, but now more than ever I’d like to experiment, design avant garde clothing, dare to do the unusual, and stand out from the crowd”. So she concentrates above all on the fabrics, which she produces herself and to which she gives a unique personal touch in the making. Her inspiration comes from nature and architecture. All this to create collections for men and women.

Claudia Hill’s boutique in Auguststrasse is furnished in minimalist style. The clothes themselves are the stars of the show. But how can they be highlighted? The changing room certainly won’t go unnoticed: a series of artistically decorated white shirts have been joined together to create a little circular room… This really is art!