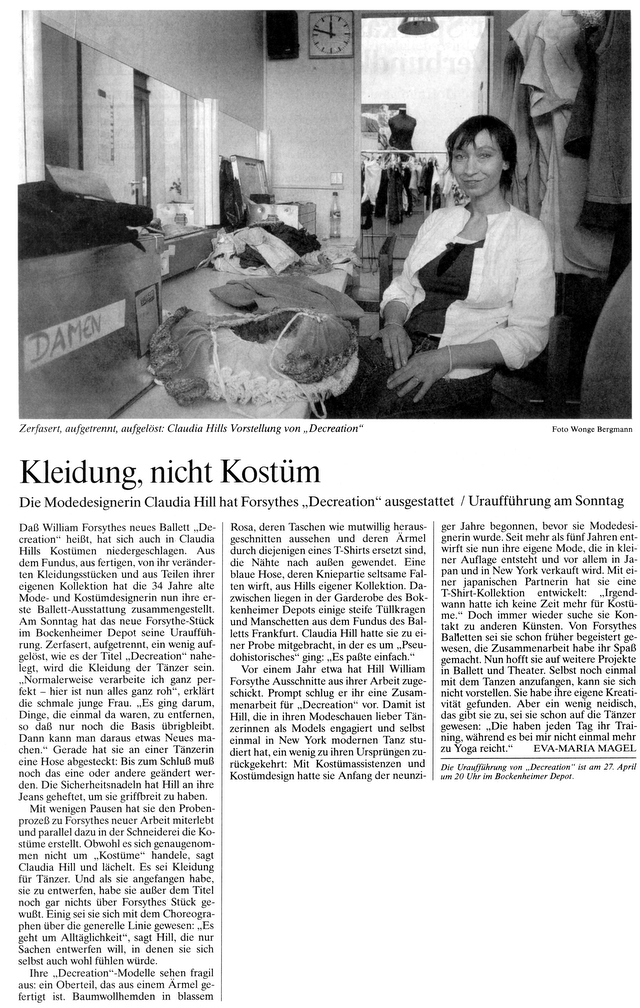 The name of William Forsythes new ballet “Decreation” has also found its way into the costumes of Claudia Hill. The 34 year old fashion and costume designer has put together her first ballet accoutrement using items from the lost and found box, mass produced clothing which she has personally altered, as well as part of her own collection. On Sunday, the new Forsythe/piece has its premiere in the Bockenheimer Depot. The clothing on the dancers, as the title “Decreation” suggests, will be frayed, ripped and slightly falling apart. “Normally I work towards absolute perfection with my clothing, but here everything is left very raw” the delicate young woman explains. “The idea is to separate things that once were, so that only the basic parts remain. Then it is possible to make something new from it.” At the moment she has just finished unpinning the pants on a dancer: up until the end, one thing or another will have to be changed. Hill has pinned the safety pins to her jeans in order to have them quickly at hand.

With few breaks in between, she has witnessed the rehearsal process of Forsythe’s new work and parallel to this has created the tailored costumes. Though to be more precise it isn’t about costumes, says Claudia Hill and laughs. It is clothing for dancers. And as she began to create them, she didn’t know anything about Forsythe’s piece except the name. She agreed with the choreographer about the general line “It’s about the everyday” says Hill, who only creates things that she herself would feel comfortable wearing.

Her “Decreation” designs look fragile: such as the top which was made out of a sleeve. There are cotton shirts in pale pink, whose pockets seem to be willfully cut out and whose sleeves are replaced with those of a T-shirt with the stitching on the outside. There is also a pair of blue pants, from Hill’s own collection, which cast odd folds at the knees. Lying throughout the wardrobe of the Bockenheimer Depot are a few stiff lace collars and cuffs from the lost and found of the Frankfurt Ballet. Claudia Hill brought them to a rehearsal which revolved around the theme “pseudo historical”: “it just fit”.

About a year ago Hill sent Forsythe examples of her work. He quickly suggested a co-operation for “Decreation”. And thus Hill, who prefers to use dancers rather than models in her fashion shows and once studied modern dance in New York, has returned to her roots: She started out in the early 90’s as a costume assistant and designer, before she began creating her own fashions, which are produced in small circulation and are sold among other places, in Japan and New York. With a Japanese partner she created a T-shirt collection: “At some point I just didn’t have any more time for costumes.” She is, however, always looking for contact to other artists. She has always been fascinated by Forsythe’s Ballets and the co-operation was fun for her. Now she hopes for further projects in ballet and theater. However, she can’t imagine ever going back to dance herself. She has found her own creativity. She does admit that she is slightly jealous of the dancers: “They have their training everyday, while I can’t even make it to one Yoga class a week.”